In this article published by the Pew Research Center, the author discusses the recent data from the 2016 fiscal year regarding the religious affiliation’s of refugees accepted into the United States.  Katayoun Kishi states that the majority of refugees who are being accepted into the United States are Christians who are religious minorities in Muslim-majority countries.  However, the author states that Christians are not the only religious minorities in these countries. This makes me wonder as to the fairness of the criteria used to determine which refugees are accepted into the U.S.  Applying to enter the U.S. as a refugee is a long and arduous process but many refugees are willing to endure this for chances at a better life, yet for these roadblocks to be placed in their way due to religious discrimination and ignorance is both angering and disheartening. 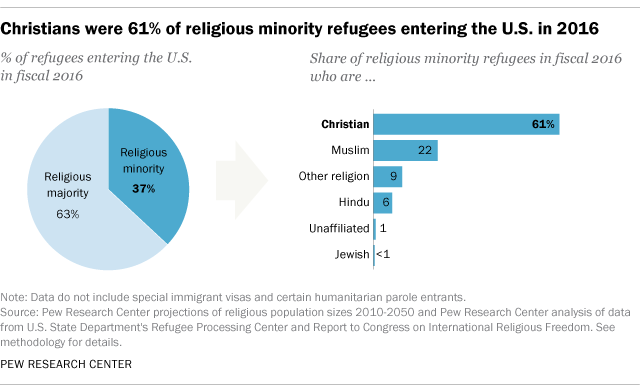 Trump has stated in an announcement that preference for refugee applications will be given to those who are Christian.  This increasing discrimination toward Muslims and Muslim countries is disgraceful and shows a real need for more dialogue and awareness of global issues and the religion of Islam.  I hope that the continuous protests and loud voices against things like the Muslim Ban, the DAPL, and de-funding of sanctuary cities will make Trump reconsider his policies.